Eat Me Opens in Geneva -

Eat Me Restaurant & Cocktail Lounge opens in Eaux-Vives on June 7th, adding a new concept to Geneva’s vibrant food and cocktail scene. Inspired by “food souvenirs” collected from journeys around the world, Eat Me invites its guests on a culinary adventure of international cuisine served on small plates designed for sampling and sharing.

New Restaurant Concept inspired by Food Souvenirs
Serena Shamash, the founder of Eat Me, set out to create a culinary experience of discovery based on her love of food and travel. “As an avid traveler, my most vivid recollections of my journeys are often the food that I sampled — the exciting flavors that represent the spirit of a city or a culture” explains Serena. “This was the inspiration behind the concept — the idea of capturing and sharing food souvenirs from around the world and offering people a venue to sample and explore the best of international cuisine in their own backyard.”

Discover of the World on Small Plates

Parting from the more traditional dining formats, Eat Me serves its menu items on small plates in an atmosphere that is designed for sharing and discovery. “We want to bring people together, and what better way for people to connect than over food? So, we have tried to create a convivial environment for sharing,” tells Serena. “Serving our recipes on small plates makes it easy for guests to taste many different dishes, to explore new combinations of ingredients, and to make new discoveries together.”

Menu from the Four Corners for the Globe
With sections representing four geographic regions, Eat Me’s menu tempts guests with a colorful diversity of dishes such as the “Nikkei Market,” a ceviche of lobster done in the Peruvian-Japanese style of cuisine, and the “Harissa Chop House,” Middle Eastern-inspired grilled lamb chops served with a homemade harissa sauce. The menu also includes reinterpretations of classics like beef tartare, which the chef prepares with Eat Me’s secret recipe.
“For every menu item, we have gone back to the origins of the dish, studying the ingredients, flavors and preparations” states Eat Me’s Executive Chef, Romain Maurel. “We enjoy exploring the recipes and making them our own. Some are contemporary versions of the original and others bring a new mix of textures and flavors. Each has a story to tell.”

Unique Culinary Cocktail program
Beyond the food, Eat Me also has an artistic cocktail program that follows the same philosophy. Combining spirits from around the world with fresh ingredients and house-made infusions, the Eat Me bar team has created culinary cocktails that reflect the character of the region that inspired them, including drinks such as the “The Black Pearl,” a cocktail of rum spiced with cardamom and ginger, and the “Andalusia,” a gin libation made with rosemary, pepper and topped with a spicy chorizo chip.

On June 7, 2018 Eat Me opens the doors of the newly-renovated location on Rue Zurlinden 6 in the vibrant Eaux-Vives neighborhood of Geneva. The launch of Eat Me in Geneva comes after five years of operations of the concept’s first location in Lausanne. This second restaurant is a continuation of Eat Me’s quest to discover and create new food souvenirs. 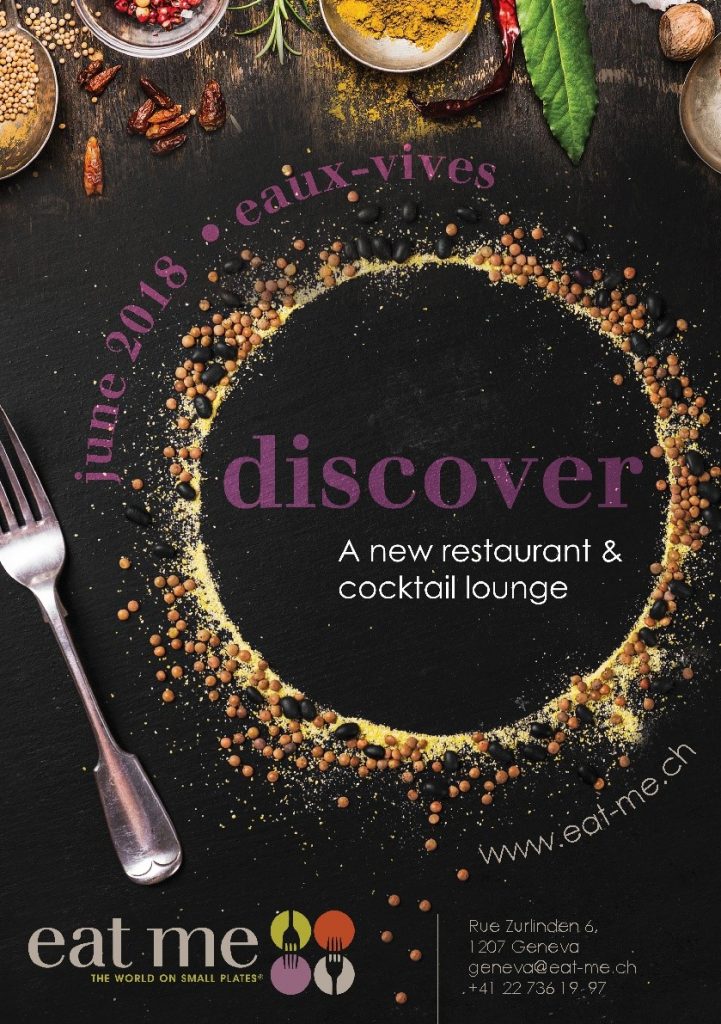